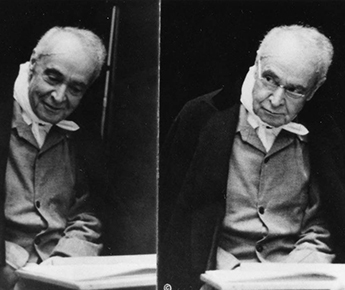 Koussevitzky programmed the Eighth Symphony again the following season, with concerts given at Symphony Hall on April 5 and 6, 1945, followed by performances in New York (April 11 and 14) and Philadelphia (April 12). The concert in Philadelphia coincided with the death of Franklin Delano Roosevelt -- and the program for this concert as well as for the April 14 concert at Carnegie Hall was revised to include just the first "Adagio" movement followed by Beethoven's "Eroica" Symphony. The BSO had contracted with RCA Victor to record the Eighth Symphony but only the first "Adagio" movement was recorded during a recording session at Symphony Hall on April 25, 1945.

Prior to the BSO's current performances conducted by Andris Nelsons, the BSO has performed the Eighth symphony only 27 times.  In addition to Koussevitzky's seven performances the following conductors have led the BSO in performances:  Mstivslav Rostropovich, Bernard Haitink, Andre Previn, and Paarvo Berglund.

CLICK HERE to view the BSO's performance history of Shostakovich's Symphony No. 8 in HENRY, the BSO's Performance History Database! 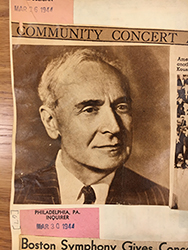 Featured Documents and Photographs
Click the links below to view the full documents.

The Concert Program for the April 12, 1945 performance in Philadelphia with program insert announcing the change in program (PDF)

Media includes MP3 file of Serge Koussevitzky conducting the BSO in the 1st movement (Adagio)  at Symphony Hall, April 25, 1945 as part of a recording session for RCA Victor. The recording project was never completed.  The Adagio movement was released on the BSO's 1989 Salute to Symphony CD and later on the Biddulph label WGH-045