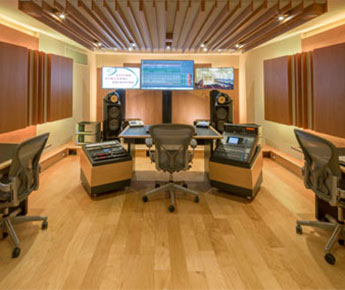 In the basement of Symphony Hall, far from the view of concertgoers, lies the center of the BSO's recording activities, its in-house recording studio.
The intricacies of and unpredictability of live music make the task of documenting - and ultimately editing, mastering, and releasing - recorded versions of concerts a great challenge for the BSO's team of audio engineers.

But all of this hard work of the BSO's recording team has recently been paying off in some pretty big ways. Following its extensive redesign and update over the last two years, the orchestra's new recording studio won a Technical Excellence & Creativity Award from the National Association of Music Merchants Foundation. That was in January. And February brought with it, once again, a Grammy Award for Best Orchestral Performance. Following last year's win for the first installment of Shostakovich Under Stalin's Shadow, this win honored the second volume, featuring Symphonies 5, 8, and 9, and released in May 2016.

The department thrives on a strong ethic of teamwork. With engineers and producers based in Boston, New Jersey, New York, and California, they have to. Plus, there's a lot of work to be done. Besides long-term to-be-released projects like Shostakovich Under Stalin's Shadow, recording staff, under Director of Concert Operations and Assistant Director of Tanglewood Chris Ruigomez, record nearly every performance in the Hall - including those of outside groups like Handel & Haydn and the New England Conservatory. During concert weeks that will not be recorded for release, they are recording at least two performances for archival purposes; thus, a multi-track archival file could be remixed and released at a later date. In addition, WCRB records for live radio broadcasts every week. Thus, for each performance, Concert Operations staff have to make sure the stage's microphone set-up will work for both archival and radio needs. Then, managing and maintaining these archival recordings so they can be preserved for generations can also be a monumental task. 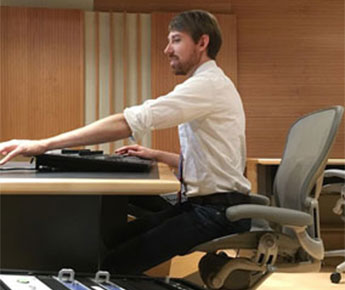 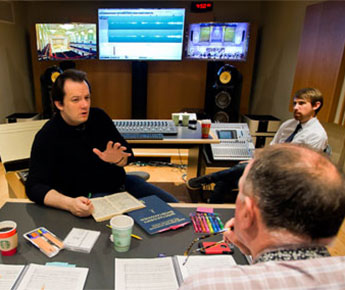 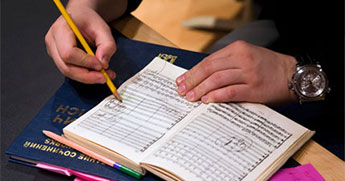 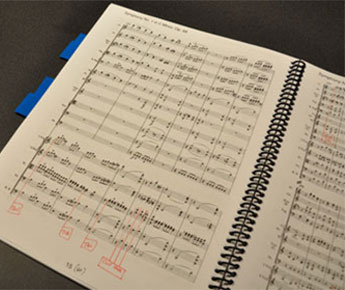 Believe it or not, however, those weeks look shockingly simple when you compare them with performances that will be recorded for release, or generally when Ray and Maria Stata Music Director Andris Nelsons leads the orchestra. Not only does the team continue recording for archival and radio purposes, but now they also face the added challenges of recording for release. "We take extra care with those concerts because we want to cover ourselves as well as we can," Recording Engineer Nick Squire explains. In practical terms, that means setting up additional microphones to allow for multiple ways to mix the recording to better recreate different ideas Maestro Nelsons may have. The number usually jumps from the normal 30 microphones to about 50. The staff even listens during rehearsals to make sure the microphones are picking up what they want to hear.

In addition, if a concert is being recorded for future release, the conductor and musicians are always very interested in listening throughout the entire process. This means that after every concert he leads, Andris Nelsons will descend to the recording studio and spend two or more additional hours analyzing what he can change for future performances. Soloists and orchestra members are also very interested in hearing what was translated from their playing onto the recording - imagine how the balance of the brass section on a recording may not be how it's perceived at the podium or how the audience hears it.

Squire explains, "Now that we've been working with Maestro Nelsons for two years, we've gotten to know him enough to anticipate what he's looking for in a piece." Still, one of the biggest challenges of his job remains that there is no objective language used to describe sound and music (What does a passage sounding 'too red' mean?). "A lot of what we do as engineers and producers is to somehow translate these vague feelings and ideas into what comes out of the speaker."

Following a concert series, post-production staff enter the picture. Under the direction of producer Shawn Murphy, who is based in California but travels to Boston for this process, the team includes two editors and two noise reducers, as well as Squire and Joel Watts in Boston. The first step sees Murphy put together a master edit map based on what tempos and interpretations the Maestro is aiming for. This will guide the editors as they switch between tracks and even concert dates to create a unified whole. Micro-edits of individual notes and phrases are also made. Edited versions then zip back and forth between artistic staff and recording staff for feedback.

Once an edit is generally approved by Maestro Nelsons, noise reduction is performed on the tracks. With more than 2,000 people in the room, including patrons coughing and musicians turning pages, this can be a lot of work. But, as Squire explains, the aim is to "just let the music speak, and not have the listener be taken out of that magical moment by a chair squeaking."

The next step in the post-production checklist is mixing. With 50 microphones picking up slightly different balances, figuring out the appropriate levels for each can be daunting. An equalizer can be used as well to make the sound brighter or darker. A little reverb may be added to fill out the general ambience of the Hall. Once a solid mix is created, the feedback loop begins again between artistic and recording staff, until at last, a final mixed version is sent to mastering engineer Tim Martyn in New Jersey.

From original performance to album mastering typically takes 3-4 months, though the team did condense this to an incredible eight days for last year's Shostakovich Symphony No. 8. This wouldn't have been possible without such talented and focused workers, stresses Squire. "In the past you had engineers, who know how the technology works, and producers, who know how the music works, and you were one or the other." But with a more holistic background, Squire and the BSO recording staff are "just as adept reading a score as fixing gear" - endlessly helpful when you're juggling as many microphones as they are.

The BSO's latest recording efforts will feature the works of George and Roberta Berry Boston Pops Conductor Laureate John Williams, from live performances at Symphony Hall April 7-8. The album will be available for the upcoming Spring Pops season, beginning in May.

Parking
Directions
Browser Warning
It appears like your current browser or its version may not provide the best experience to view our website.

Please consider using the browsers listed in the link below :-